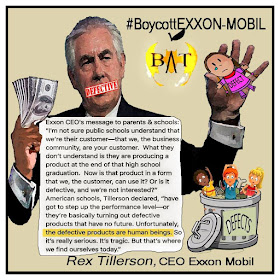 Fortune magazine has a special report that has been released on the internet and scheduled to appear, as a shortened version, in the January 1st edition of their magazine. This special report spotlights the push back from the Tea Party against the corporate push to support the Common Core State Standards (CCSS). This report highlights Rex Tillerson, CEO of Exxon Mobil and Education Chair of the Business Roundtable as being the main proponent of the push for states to willingly adopt CCSS. In this report, comments from Tillerson are highlighted, even though they were said some time ago. These comments refer to our children as products, merely being primed for corporate consumption by the companies that exist to line the pockets of a small percentage of the population.

BATs call upon all parents, students, and educational professionals to publicly join us in a boycott of Exxon Mobil and take a stand against the corporate greed that is profiting against the backs of our children.


Badass Teachers Association - http://www.badassteacher.org/
Recently, Fortune Magazine released a special report “Business Gets Schooled” to expose how corporations have experienced pushback from the Tea Party about the Common Core State Standards. http://for.tn/1JvahZu In this report, Rex Tillerson, CEO of Exxon, is quoted as saying that American schools are turning out “defective products that have no future.”


The members of the Badass Teachers Association are appalled that our children and our students are thought of in a way that strips them of their very essence as human beings. In response, we are calling for a boycott of Exxon Mobil.


“As a public school teacher, let me be clear: my students are not products. Education is not about turning children into widgets for big business. It is about readying children for life, and that includes so much more than the tiny and inhuman vision of people like Rex Tillerson. Hands off my students, my daughter, and my country!” demands Steven Singer, parent, teacher, and public education activist.


“A CEO that thinks our Children are products cannot be allowed to influence education policy with their money! Our children are innovators, amazing individuals each one with their own gifts; only love, food security, housing security and loving, caring teachers can unlock their potential. My students are not defective; however CEO Rex Tillerson is defective in his thinking of what it is to be human.” stated parent, teacher, and education activist Jamy Brice Hyde.


Melissa Tomlinson, Assistant Executive Director of BATs responded; “CEO Rex Tillerson's comments amplify what is really wrong with our country. The fact that a person in charge of a multi-billion dollar corporation with international influence only sees our children as products to be developed for eventual profit dehumanizes the majority of our county.”


Not happy with how they were characterized, Suzzanne McCarron, vice president of public and government affairs at Exxon Mobil only furthers exemplifies the fact that Exxon Mobil has no understanding of the education of children and what education reform needs to be when she makes the statement that “U.S. students rank 31st in the world in math, 24th in science, and 21st in reading.” http://for.tn/1VlkbUo This statement, backed by the knowledge that Exxon Mobil is one of the leading corporate proponents for the Common Core State Standards, demonstrates the corporate ignorance surrounding how we truly need to look at public education in our country and examine how we can provide the resources our children really need to further their educational success.


###
The amount of pressure that has been placed upon our states and our legislatures by this corporate Business Table to turn our children into a product solely for the use of corporations is unconscionable.
An anonymous source passed us the following letter from Exxon Mobil, specifically Rex Tillerman, that demonstrates the pressure and implied strong-arm tactics that have been employed to ensure the continuous state support of these standards as they guarantee a future of product-children for their corporations. 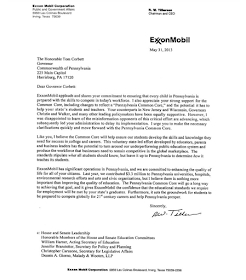 BATs have been adamantly opposed to these standards and will continue to voice opposition against all that seek to profit from public education and our children.
BadassTeacher Association at 6:01 PM
Share