Disrespecting the American Teacher:
The Saga Continues in NYC 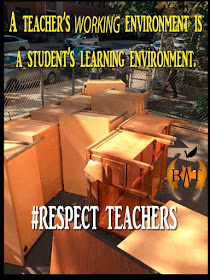 This past week it was brought to BATs attention that a principal in NYC had tossed out teacher desks and chairs. Please keep in mind that we are now in late October, school started in September, and this seems like an immense upheaval to do to teachers and children this late in the year. 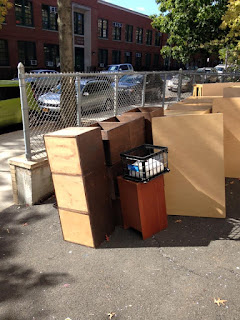 Here is what has been reported to us by inside sources:

#1 -
This was an act of retaliation against teachers who do not agree with her so-called vision of what the school should look like. Since this administration took office the test scores have declined. There has been a history of mismanagement of this administration's part. Several investigations have taken place. Many complaints have gone to the superintendent by parents and teachers. There is an atmosphere of fear. The principal is not approachable. At meetings she tells us we are not allowed to ask questions. We cannot be confused.
The removal of desk from teacher’s classrooms was an act of revenge. When teachers asked why, she said this is the 21st century. File cabinets were also removed. Teachers were told they are dinosaurs. Some teachers came in to school to find a post it on their desks say the desk would be removed that afternoon. There was no explanation. The file cabinets were dinosaurs, not the teachers. She said nothing about replacing them with tables. Articles from desks were put into boxes and plastic bags. Teachers had to clear out desks during instructional time. Some teachers were so fearful they pushed their desks into the hallway. The students were confused. Some of them thought that they were going to lose their desks too.
It seems as though the superintendent is protecting the principal. The superintendent is well aware of Connelly's antics.

#2 -
I am a teacher at PS 24 who had her desk and filing cabinet removed on Tuesday. Thank you and all the BATs for bringing attention to this issue. The BATs have done more in one day than our union was able to do in 7 years.
Many of the teachers are quite concerned about retaliation tomorrow [Monday, Oct 19, 2015]. Although it was mentioned that we should all wear aprons with scissors and post-its and stablers, etc in pockets, everyone is too afraid. Dr. Connelly was verbally abusive to several teachers on Friday.
This is not the first incident of her insanity. There have been several investigations into her conduct to no avail. The Superintendent has been to our school and basically gave her a slap on the wrist.
Dr. Connelly told the Super that she was buying the teachers trapezoid tables in replacement of our desks. However, the secretaries have stated this to be untrue.
I am telling you this in hope that you will continue to make this public since the parents are also concerned that there will be retribution against their children if they speak up.
You have my permission to use my words anonymously.
Once again, I truly appreciate what the BATS have done.
Thank you

#3 -
Hello! I am also an employee at PS24. While it is true teachers were told they had to remove desks and filing cabinets, it seems to be circulating that teachers aren't allowed to sit. There are computer tables with teacher chairs still where they can do work. The principal really hates the look and feel of "older" classrooms with big monstrous desks and sort of the front vs back teacher directed classroom. The biggest issue I have with this all, and so do many others who work here is that this was handled mid-October when teachers were already in the swing of things. Their entire week was spent reorganizing and trying to make a new system that will work to put things in (files, supplies, etc). I'd like to remain anonymous but feel people should know that teachers do still have a work station and chair, just not the typical desk. Is it right how it was handled? No, not at all, but teachers weren't told they can never sit, so for the people saying this is an ADA issue and contact OSHA etc, that's far off. The principal did say she doesn't want teachers who sit behind their desk all day and don't interact with the children, which truthfully removing the furniture is not going to magically change anyone who still does that (which is very few, if any, teachers in our building to begin with). The furniture is not 21st century and not going to work with the common core. These were all her reasons for doing what she did. Again, the timing and handling of the situation was poor and not the first time she mishandled a situation to upset the staff. Just thought it would be informative to hear more facts. Thanks to BAT for bringing attention to this issue!

#4 -
On Tuesday October 13, 2015, I arrived at school after the three day weekend to a post-it note asking for me to see the principal. My intention was to go to her that day during my prep period.
Early that morning Dr. Connelly forcibly opened the classroom door, banging it against the wall. My students looked up to see what the commotion was. Dr. Connelly yelled at me across the room, "Your desk has to go. And the filing cabinet too!" I said alright and asked if I could have a table to put my lesson plans and other items on. Dr.Connelly shouted, "No. I'm not giving anyone a table. Use your Teacher's Choice money to buy drawers or bins. Get rid of both of them! Today!
After Dr. Connelly stormed out of the classroom, my students stared at me, stunned. I attempted to reengage them when one asked "Why is Dr. Connelly so mad?" I did my best to diffuse the situation, however the tension was evident.
I, among others, fear retaliation. Everyone in the school knows when she is after someone. It is my hope that my anonymity will be protected so that I can continue to teach my students as best I can, despite the hostile environment.

The disrespect of the American teacher is alive and well at PS24.

The larger question here is, why are folks afraid to speak up, even parents, for fear that there would be retaliation against their child?

There are larger issues here, but the very out in the open display of removing teacher’s desks, throwing them in a heap of garbage, speaks volumes to the disrespect that both the children and teachers in this school are enduring as a result of this episode.  To make teachers “reorganize” this late in the year shows a lack of respect for what they do but most importantly impacts the children that they teach.

Good school leadership is about respecting your teachers but most importantly protecting the learning environment for kids so that it is stable, productive, and secure.  Maybe it is time for the principal of PS 24 to go back to Education Leadership School and take a class on how to respect teachers so that they can educate children in an environment that is stable and secure. 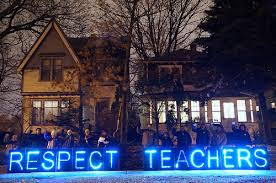 The Principal of PS 24 sent around this email today telling teachers if they do NOT want their desk returned to let her know. 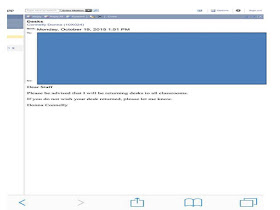 Inside sources are telling us that teachers don't just want their desks back, they want their filing cabinets back as well.   #GiveItAllBack 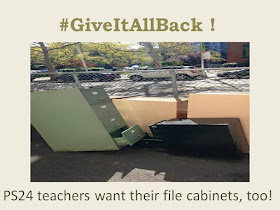 After the Principal was ordered to return the desks this is what has been happening as reported from our inside sources:

Source #1
Some teachers are intimidated but most are just annoyed by the whole situation. Our classrooms were disrupted once already, many reorganized their rooms to make things work without the desk, some purchased new containers and now to be asked to do it all again. A lot of people have the move on attitude. If desks were just returned to all then it would be a different story but now it is to some and a line has been drawn.

I was expecting to walk in today to find a desk but instead our Associate Principal walked around making a list of who wants it and who doesn't.
Our principal is claiming the superintendent wants the list. This puts teachers in an awkward position.

Bottom line is - this Principal needs to learn to respect teachers who will collectively fight for their students to have a learning environment that is stable and secure! 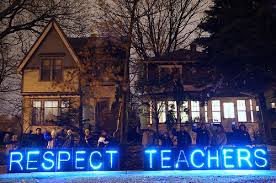