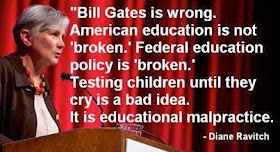 Who Will Be the Next Secretary of Education in 2016?

As we approach the beginning stages of the 2016 presidential elections, the stakes for the future of public education in this country could not be higher. Moreover, it is time for teachers, administrators and parents to consider whether the next president of the United States will be a true education president. Needless to say, we cannot afford another four years of an Education Secretary such as Arne Duncan. Secretary Duncan who, as a corporate education reformer with his obsession with standardized testing, has done more to privatize and weaken public education than any other Secretary of Education in the past.

Under Arne Duncan’s regime, we have witnessed the demise of the neighborhood school and the growth of charter schools as part of the privatization movement. He has imposed with his Race to the Top (RTTT) and Common Core (CCSS) programs a plethora of stifling high- stakes standardized testing - often referred to as the “Duncan testocracy” - on the schools including the use of tests to assess teacher performance. His method of education reform has grossly neglected the impact of childhood poverty on learning for children from impoverished homes. This is what happens when you appoint an unqualified non-educator to the highest education position in the nation.

Likewise, Duncan has been a champion and spokesperson for the wealthy and powerful in the nation in their efforts to privatize public schools and to weaken and ultimately destroy the teaching profession. Duncan’s affiliation with Bill Gates is a prime example. The Obama administration with its “Race To The Top” program has been a continuation of the war on teachers that began when George W. Bush was president with his “No Child Left Behind” testing fiasco. Anyone who denies this extended war on teachers is either a silly, inexperienced fool or a paid shill for the corporate reformers and the testing industry.

Based on the early polling, it appears that Hillary Clinton is a clear frontrunner who more than likely could become the next president of the United States. If she is able to attain the highest office in the country, we need to begin a grassroots movement to convince her to appoint an educator to the position of Secretary of Education. Hillary Clinton has been an advocate of universal pre-kindergarten, arts education in the schools, after-school tutoring as well as smaller class sizes and educators now need to convince her of the need to also be an advocate for a diminishing role of standardized testing in public education. There is no guarantee, however, that Hillary the politician will not follow in the footsteps of her predecessor, President Obama, as she, and especially her husband, former President Bill Clinton, have close ties to Wall Street and to their former Treasury Secretary, Robert Rubin.

Hence, the crucial need for a grassroots movement consisting of teachers, administrators, parents and students who are concerned about the future of public education in the country and who can help to persuade Hillary Clinton of the importance of not appointing another corporate reformer for Education Secretary. It is critical that the grassroots movement help to push Hillary Clinton to the left on education issues, especially if Jeb Bush is Hillary’s Republican opponent who will more than likely be a staunch candidate for Common Core. In essence, where else can Hillary go other than to oppose Common Core which has become a national curriculum with its ridiculous high-stakes PARCC and SBAC testing?

However, teachers and parents cannot do this alone, as we need organizations such as the Connecticut Education Association (CEA), National Education Association( NEA) and the American Federation of Teachers (AFT) with their clout, financial resources and numbers to influence Hillary Clinton to appoint someone to the cabinet position of Secretary of Education that is truly a champion of public education as well as someone who also has the support and respect of teachers and parents. We also need to have someone as Secretary of Education who has presidential support and will serve as a catalyst to provide a mission to the new secretary to begin to undo the disastrous harm that Arne Duncan has inflicted on public education in his eight years as Education Secretary.

One name who comes to mind and who has a proven track records in her efforts of supporting public education and teachers is Diane Ravitch, author of the best selling book, “Reign of Error: The Hoax of the Privatization Movement and the Danger to America’s Public Schools.” Dr. Ravitch has had experience as the Assistant Secretary of Education during the George W. Bush administration so she possesses first hand knowledge of the inner workings of the Department of Education. Dr. Ravitch has traveled the country giving speeches to teacher groups and parents as there is no other individual that corporate reformers fear more than Diane Ravitch as she is the nation’s leading public school advocate. Her blog is widely read by millions of educators and parents throughout the nation as she has a huge following. Aside from being very knowledgeable and a powerful advocate for public education, she is a highly competent and distinguished educator with a doctorate from Teachers College, Columbia University and currently a Research Professor at New York University. Diana Ravitch is, without doubt, clearly the person who will lead the charge of restoring public education to its rightful place in the United States.

Hence, the grassroots movement cannot wait until after the election to lay the foundation for the appointment of a proven education reformer and public school advovcate such as Diane Ravitch for education secretary but must begin now. A strategy is needed that will be persuasive in convincing Hillary Clinton to consider Diane Ravitch for the cabinet position of education secretary. Perhaps organizations such as the NEA and UFT can threaten to throw their support to Elizabeth Warren if Hillary doesn’t agree to a progressive such as Diane Ravitch for education secretary. The grass root participants need to have a strategy in which they will frequently speak out during presidential campaign events that will occur very often during the months prior to the presidential election by asking specific questions of the candidates and especially of Hillary Clinton concerning the qualities they will seek when appointing someone to the highest education office in the country.

They need to write many op-ed pieces in newspapers all over the country and will need to be certain that those individuals chosen to narrate presidential debates ask the appropriate questions concerning what qualities will the new president seek in the selection of the Secretary of Education. And finally, what has happened in the New York City’s mayoral election of Bill de Blasio , which was a repudiation of former Mayor Bloomberg’s corporate education reform policies, needs to serve as a model for Hillary Clinton. The message of de Blasio’s election is crystal clear as it indicates that the tide in the country concerning education reform is changing. We now need to see this change occur at the national level and, for this to happen, we need Hillary Clinton to rescue public education.

Students, parents and teachers need her to give serious consideration to appointing an individual to be Secretary of Education that is an educator and one who will restore public education in this country to its rightful place.